Ten years ago this month, my college roommate went abroad. What was for her a once-in-a-lifetime opportunity to broaden the ole horizons — literally and figuratively, it turned out, when she tripped and fell into an astronomy program in Paris — was for me a practical inconvenience. “Dianne Wiest,” I would announce to the living room, “in a movie about learning to yell called Wiest Meets EST.” But the room was empty and I was alone.

I have always needed an audience. I’m slightly more myself in the presence of an other: a little realer, a little more alive. The honesty of deliberate self-invention fascinates me in a way that accidents of authenticity do not. Twitter, for me, was never about Joining any kind of Conversation; it was about supplanting the captive go-to audience of one that was suddenly half a world away.

You can pretty well feel it, in my first tweets — there’s a too-muchness to them, a cloying sort of heat that all but screams like me. In my defense, I was still feeling out the form. We all were. Twitter in 2008 was something that one still had to explain — “like a blog, but shorter”; “like a cocktail party, but with people from around the world”; “like texting, but in public and with strangers” — which functioned as both a barrier and an inducement to entry and was incredibly liberating either way.

It’s exciting to live inside a leaky metaphor, at least until the roof caves in. Twitter isn’t really like any of those things; indeed, there’s only a limited extent to which Twitter is exactly like anything else that came before it. In a way that image-conscious Instagram and family-feuding Facebook could never be, Twitter is a live mic dropped directly into the collective unconscious of the Internet. This is part of the reason the form responds with such enthusiasm to the dada and deranged: it’s a dreamscape. 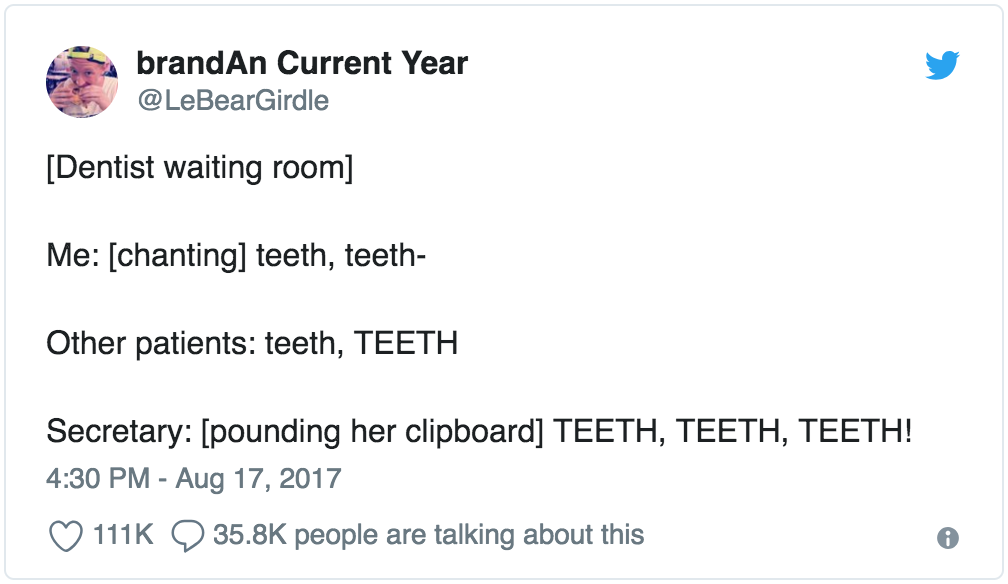 Or, if you like, a nightmare. This is also part of the reason the platform has excelled at incubating violences, hatreds, and cruelties. It’s not, or not just, that Twitter’s brevity and instantaneity lend themselves to the reactionary; it’s that the platform’s deep humanness lends itself to monstrosity. Stream consciousness at scale and you’re at least as likely to get a Mein Kampf as a Mrs. Dalloway.

#BanTheNazis, of course — it certainly couldn’t hurt. It’s just hard to imagine that Twitter has the capacity to divest itself, even with the most salient terms-of-service tweak, from the whole of human ugliness. The problem is incentive: the unit economics of piling on the bad take have never been quite so lucrative. What Twitter-the-user-base calls getting ratio’d, Twitter-the-Delaware-C-Corp calls hockey-stick unicorn engagement.

I’ve been told this is a dark reading; I submit that it is also a necessary one. If we go on treating the dank and dangerous subbasements of Internet platforms as though they were negative externalities of the platforms’ construction rather than constituent parts of their foundation, we absolve their creators — and their users — of moral responsibility for their condition.And all the hearings in all the subcommittees in all the parliamentary bodies in all the world won’t fix a problem no one is willing to genuinely own.

Twitter promised more than it could deliver. I released the pressure of some intrusive thoughts; I tricked a now-dwindling handful of people into following me; I made friends, including a few truly good ones; I fed a ravening techno-capitalist machine a novel-length decade of minimally structured capital-dData. But I can’t say that I brought my roommate back. Chasing the Lucky Charm sigils at the bottom of every tweet didn’t restore me the writerly audience for whom those tweets were, in a roundabout way, authored.

The network was no substitute for connection. This is probably always true: it’s true of the Internet, it was true of TV. And it’s probably a lesson we will each have to learn, one by one and the hard way.

Perhaps the trick will be to ask less of our platforms — to take what joy we can in them and to move on, allowing the ineffable in human relationships to flourish in less hardscrabble climes. The best of Twitter right now isn’t the vague trend towards treacly sincerity (I’m sorry to have to be the one to say out loud that Lin-Manuel Miranda’s account is insufferable); instead, it’s Daniel Ortberg in a wig, imagining conversations between Anna Wintour and Joan Didion.

However much it exists in open defiance of Twitter Moments, creative work like this is also a first-class feature of the platform: absurdities of spirit and style that float blithely through an otherwise outrageous feed. Encouraging it might be a matter of paradox for Twitter— “connecting people” slightly less, to restore the intimacy of Twitter That Was, or constraining people slightly more, particularly when they’re bots. Move slower. Break fewer things. Most of what’s good about the product bubbled up from the user base, after all; a Twitter Inc. that did a little less might find itself with a Twitter platform that offered a little more.

Then again, maybe these odd liminal spaces are the best the platform has to offer. I suspect it’s there that we’ll have to —or get to — decide what we’ll build on the rest of it. RT if you agree.

Daniel is a lead engineer at Postlight and the founder of Ignota Media. He fears nothing, except for forks with wacky tines.

Get the best of Track Changes straight to your inbox.